Such cries are part of the culture today, yet I challenge the sanity of such claims.

First of all, what exactly is discrimination? 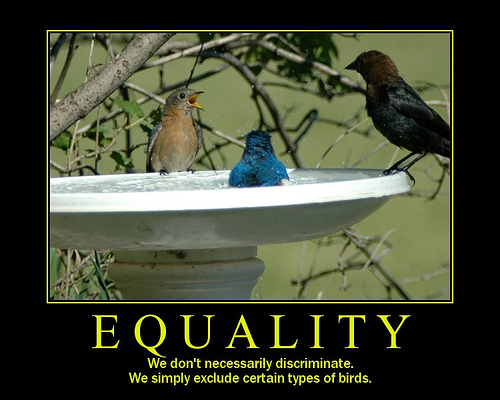 As transitive verb:
• to mark or perceive the distinguishing or peculiar features of
• to distinguish, differentiate
• to distinguish by discerning or exposing differences: to recognize or identify as separate and distinct

Can we all agree on one obvious observation? None of these definitions are inherently negative. In fact, the core idea of discrimination comes from the Latin word discriminare, which simply means to divide or separate. In other words, discrimination is simply, in the words of Webster, “making a distinction.”

Imagine the nonsensical idea of someone saying, “We never discriminate in this work environment.” So, are they saying they never make distinctions? Let us throw a couple obvious examples out there of situations where discrimination is muy importante.

Can you imagine the absolute insanity of a hospital that said they would not discriminate in the hiring process? Nobody would ever go there! We expect discrimination to be a vital part of our society—otherwise society cannot function.

But solid food is for the mature, for those who have their powers of discernment trained by constant practice to distinguish good from evil (Heb 5:14).

Our word discernment is etymologically related to discrimination (you can see the similarities just by reading the words). In fact, many dictionaries use discernment as a synonym for discrimination. Both words inherently mean to make a distinction or division.

According to Hebrew 5:14, the mature Christian is the one who has his discriminatory powers trained through practice determining what is good and evil. This maturity comes through the constant digestion and application of God’s Word—which is applicable for every situation and every need (cf. 2 Tim 3:16-17). On the other hand, it is the immature believer who can’t rightly differentiate between what is good and what is evil. Likewise, it is the immature Christian who thinks that discrimination is an evil concept and should not be practiced.

I will say one more thing. To discriminate on the basis of sin is wrong. Racism is an example where people discriminate on the basis of their own pride, believing themselves to be superior to others of different races. That is wrong, not because it is inappropriate to make distinctions, but because the underlying reason for that distinction is sinful and evil inherently.