Happy Day of the Mother (aka Mother’s Day)! This Sunday marks a special day as we commemorate the value of mothers in the lives of our families. I have stated before that being a mother is very important. In a culture which attempts to mitigate the differences between males and females, these are special opportunities to point out that children relate differently to fathers than they do to mothers. God has designed the role of mom to be integral to the upbringing of children.

Barna recently released a survey which looks at the relationship of teenagers and their mothers. I think the observations can be applied to children of all ages. Here are two of the major takeaways.

Teenagers in the Christian home look to the mother most often for encouragement, advice, and sympathy. 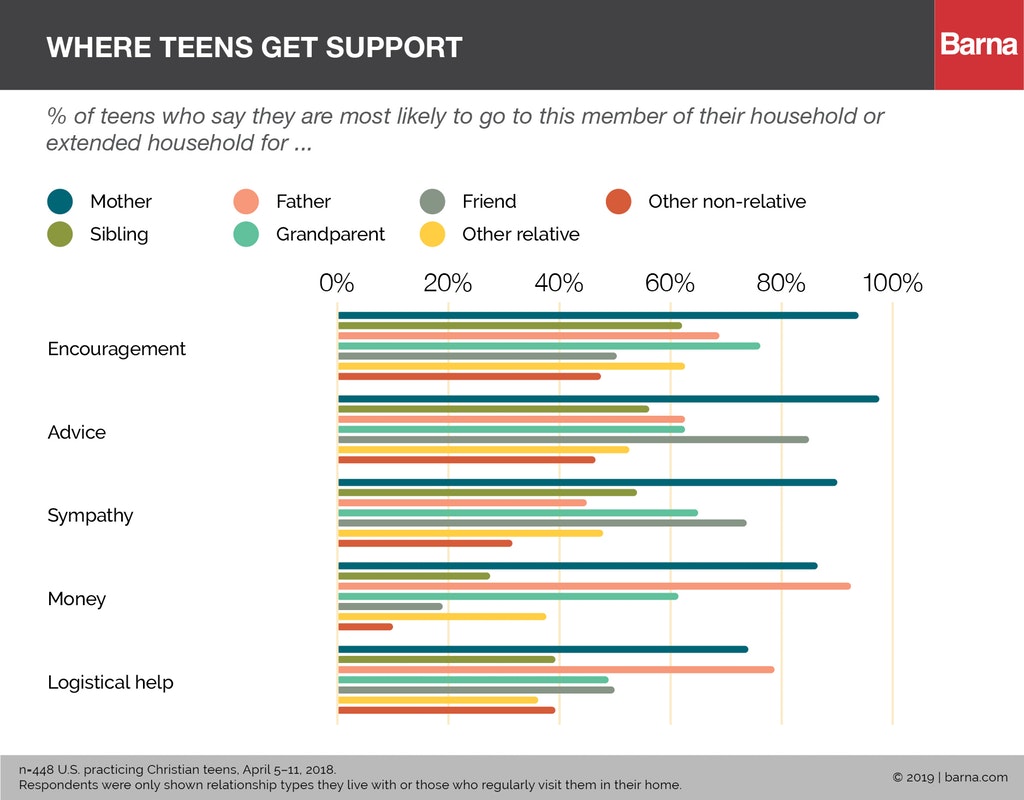 I find it interesting that in the same survey teenagers go to dad most often for money and logistics. Anyone who has ever seen kids knows that children relate differently to mom than they do to dad. God has created the role of father and mother as perfect compliments—and it is a true joy to see mothers functioning as God intended.

Teenagers in the Christian home spend the most time with, and talk most often to the mother.

This reminds me of Acts 16:1-2 where we are introduced to Timothy as the “son of a Jewish woman who was a believer.” Apparently, it was through Timothy’s grandmother and mother than he learned the faith (cf. 2 Tim 1:5). Mom’s have such an opportunity to talk to children in so many seasons and stages of life. I remember always asking my mom questions—questions about theology, geography, physics, ghosts, angels, God, etc. Mom’s have such a privileged (and demanding) role. They are often the first go-to for a child’s questions and the one with whom children spend the most time. 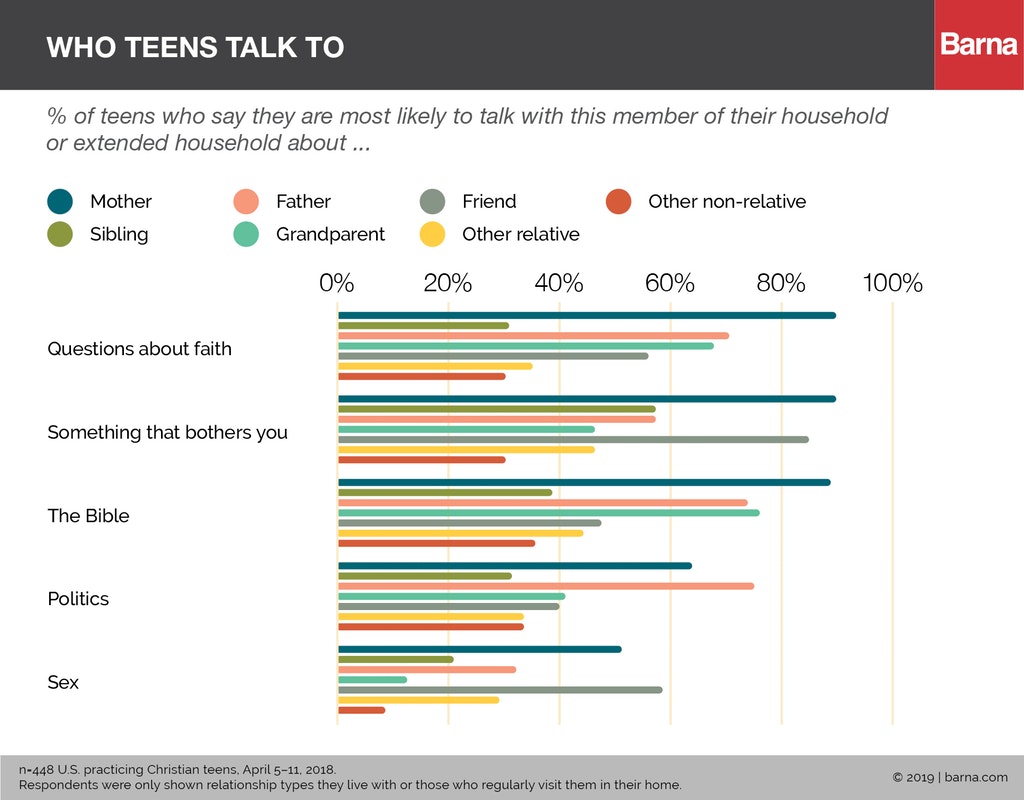 The Barna research also points out that teenagers often look to the mother for spiritual guidance and encouragement. 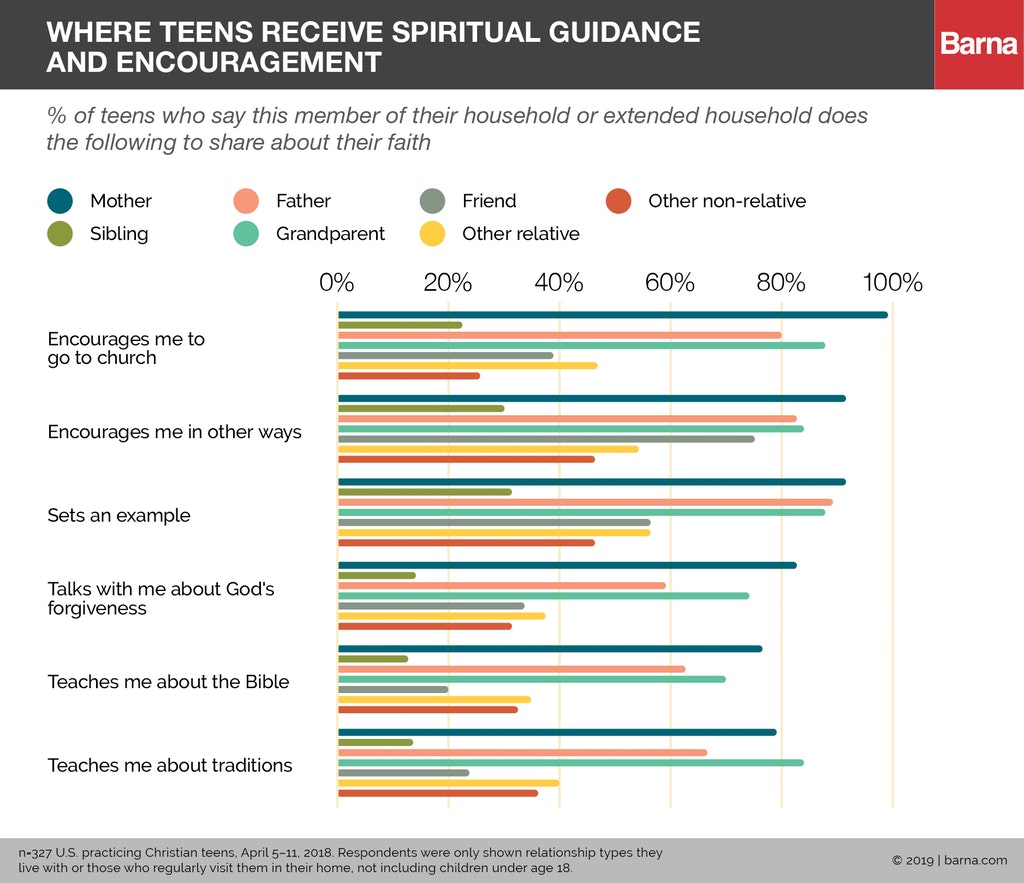 At the end of the day, it is obvious kids and teenagers do not view the mother and father the same. God has designed the family in a unique and special way. Moms have a special and privileged role. But, it is a very demanding role. It is a role of sacrifice, sweat, and tears. But, without the mother, the family would be incomplete. Thank you to every mother out there for their significant sacrifices! May God bless you for obedience to the highest calling.

Note: You can access more charts from the Barna research here:  https://www.barna.com/research/moms-christians-households/