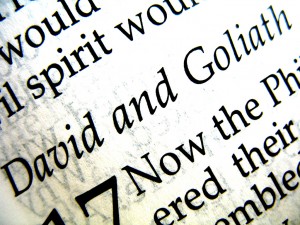 Some liberal scholars postulate the idea that as we read the story of David, we are actually reading multiple versions of legendary tails which have been woven together into the whole story we read today. They claim this is evidenced by inconsistency in the biblical narrative, and a chronological flow that does not make sense at face value.

One of the examples they give to attempt to prove their point is the two interactions of David with Saul.

David is introduced the first time to Saul in 1 Samuel 16:14-23. An evil spirit from God comes to terrorize Saul, and so Saul asks his servants to provide a young man who can calm Saul down with music. Providentially, David (who was just recently anointed by Samuel) is chosen to play for Saul. The text says, “Saul loved him greatly, and he became his armor bearer” (1 Sam 16:21).

When the narrative of 1 Samuel 17 picks up, it is an indefinite period of time later (likely a couple years later), and as the Philistines begin a campaign against Israel, David is at Bethlehem tending his father’s sheep. When David goes to the battle front to check on his brothers, he hears Goliath’s blasphemy and accepts the giant’s challenge.

What is most interesting about 1 Samuel 17 is that Saul doesn’t appear to be familiar with David, and asks Abner to ascertain who the young man’s father is (v. 55). Saul had previously sent messengers to David’s father, Jesse, asking for David’s musical abilities (1 Sam 16:19). Is it possible that this is a separate legend which tells of David meeting Saul for the first time?

There is no real reason to suspect that Saul did not recognize David. In fact, the very notion that Saul sent for David when he heard David’s words; and that he let David go out and fight speak to the probability that Saul had been long impressed with this young man. It was not the first meeting of these two.

As for Saul not knowing David’s father, this detail is easily understandable. It was originally a servant of Saul who told him of Jesse’s son, and Saul dispatched messengers on his servant’s information without ever meeting the father. If Saul had ever known David’s father’s name, it is likely that the intervening time and psychological episodes often experienced by Saul would have made recalling this information difficult to say the least.

There is no need to conclude that the narrative of David is made up of different legendary tales. If allowed to flow in a natural chronology, the details of the story do not contradict. Thus, one should be content to read the stories of David as a complete sequence, always intended to be read as a whole.