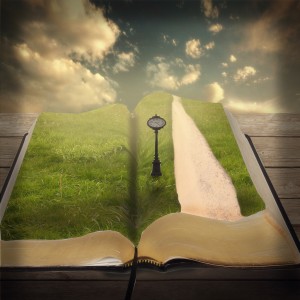 Everyone loves stories. We like watching movies, reading books, or simply talking to each other about our lives. Stories are a part of us, we cannot escape them.

The majority of the Bible is made up of stories. Because we are surrounded by stories all the time, one would think we would understand the Bible better, if for no other reason than the fact that the Bible contains stories. However, we often struggle in narrative passages because we are not sure what the application is for our own life. This often leads to reading Bible stories in the wrong way.

In Judges 6 we read the story of Gideon. Gideon asks God for a sign to indicate that God truly is with him (Judg 6:36-37). God obliges and gives Gideon the sign (v. 38). Next, Gideon asks God to reverse the sign so that he knows for sure God is with him (vv. 39-40). How are we to apply this text?

In Genesis 39:6-18 we come upon the story of Joseph and his encounter with Potiphar’s wife. She tries to seduce Joseph, and he ends up in jail because he refuses. How are we to apply this text?

In our efforts to apply Bible stories, we often come up with our own personal application templates. It is not uncommon to preach the story of Gideon with a title of, “How to know the will of God.” Likewise, Joseph’s story is often preached with a title of, “Five strategies for staying sexually pure.” Is there anything wrong with this approach? How do we know whether it is right or wrong?

I would like to suggest that the problem with this approach is that in the above examples we are adapting the stories for our own purposes instead of using it to communicate what the author intends.

Let’s say, for example, that my friend Joe and I are having a conversation. Joe wants to impress me so he tells me about how he is the fastest runner in California, holding the record in the 400m. He tells me his story about training every day to accomplish this feat, culminating in running the record-setting race. In the process of telling his story, Joe tells me that he wears Nike shoes as a peripheral detail.

Rather than recognizing Joe’s purpose in telling the story, after he is done telling me the story, I say, “Wow, so what you’re telling me is I should wear Nike shoes and then I will be the fastest runner in California!” At this point, Joe just shakes his head and walks away. I obviously missed the reason he was telling me his story.

In the above example, Joe is tells me a story for a specific reason (to display his greatness in running). However, I used his story for my own purposes. I adapted it and changed the intent of the story. The problem is that proper communication does not work like that!

Biblical authors (like all communicators) have a purpose behind their stories. The application of the story is necessarily built into the story itself.

Take the previous two examples. The story of Gideon in Judges 6 is not about seeking God’s will. Rather, it is a demonstration that God preserves His people despite their faithless lack of courage. God is the hero of Gideon’s story because He works through Gideon’s weakness and inability to trust God.

The story of Joseph is not about how to avoid sexual temptation. Rather, it is a story about how God uses His sovereign hand to prepare the means to save His people and keep His promises. God shows Himself to be the promise-keeping God, even through the wicked intentions of Joseph’s brothers.

Why Does This Matter?

The issue is whether or not we are using God’s Word as He intended us to use it. Just because we are “getting something good” out of the stories doesn’t mean that is the right way of using God’s Word. We do not believe that the ends justify the means. Therefore, we believe that God is concerned about the process in which we glean our application. Not just the application itself.

Rather than simply applying stories as being prescriptive for our own lives we would do well to remember the phrase: description is not the same as prescription. The power of the stories in the Bible revolve around using them the way the author intended his audience to use them. When we depart from that authorial intent of the Bible stories, we depart from God’s intended application for our life.